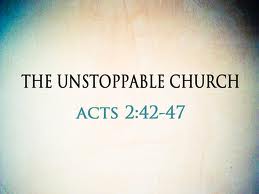 “They devoted themselves to the prophets’ teaching and to fellowship, to the breaking of bread and to prayer. Everyone was filled with awe at the many wonders and signs performed by the apostles. All the believers were together and had everything in common. They sold property and possessions to give to anyone who had need. Every day they continued to meet together in the temple courts. They broke bread in their homes and ate together with glad and sincere hearts, praising God and enjoying the favor of all the people. And the Lord added to their number daily those who were being saved.” (Acts 2:42-47)

For as far back as I can remember I have heard people reference a longing to return to the days of the early Church, “The Acts 2 Church.” Having spent much time wandering the streets of Jerusalem, I must admit I can’t help but daydream about what those days must have been like. The words, the miracles, the numbers added daily! The two things that used to boggle my mind the most, however, are the love had and community shared by the first century believers. What would it look and feel like to be so devoted to God that you in turn devote yourself to others to the point of speaking covenantually,”What’s mine is yours.”

In July of 2007 Patrick & I found ourselves in the midst of new pages in life and being written upon with words we never expected. We had no home church. This was new to us and frankly speaking, it truly upset my idea of the Christian walk. Yes, I know the Church is not a building, but the corporate body of believers in Jesus as savior. I had always been a part of such a body. And now we were in a place where after 8 years of close intimate fellowship with people who had become family, it was just we four. We live in a city that is often times referred to as “crowded” with churches, so we began our search for the people we would join our children and ourselves to as our church family.

We awakened early each Sunday morning and went through the routine of preparing for church and drove across town to “try out” each new place. As we did I asked the Lord to lead us to the people He would have us call “home.” I didn’t lay out before Him my list of requests for what I’d like in a church. I only wanted for my family what God had for us; the man who would speak the Word as directed by God; the Sunday school teachers and children’s church leaders who would seek God weekly and partner with me and Patrick in training up our girls in the way they should go; worship that was pure, for and about Jesus; and a community that would love us like Jesus, regardless of where we had been, what we had done, or who we once were.

Finally, after months of searching which often times resulted in quitting, we found ourselves walking through the doors of Hope Community Church one Sunday morning in December.

We asked where to take our children for classes, checked them in, and walked into the sanctuary and found our seats all without being greeted. Ironically, this was perfect for us! Only God knew how desperately we wanted to just blend and not be noticed. He loved us so much and cared so much about us living out His plan to hide us from a community of people who are typically quick to greet visitors. This was His way of delicately aligning His plan for us, people who were so fragile we might have shattered at the slightest approach.

We settled in for only a couple minutes (we purposely got there as close to start time as possible so that we would not be forced to be “fake” with strangers). When the lights dimmed and the music began to play, in the darkness I heard an angelic voice begin to sing:

You’ve taken my pain and called me by a new name.

You’ve taken my shame and in its place, you give me joy.

You’ve taken my pain and called me by a new name.

You’ve taken my shame and in its place, you give me joy.

That’s all it took. I broke. I thrust my hands up in the air, the flood-gates flew open, and I began to weep in the presence of God. With those tears and as the song continued, I felt my soul going through a baptism. I received hope that with the death and burial of my old life, I might receive a new life and with it a new name and joy.

As the service closed out and the team returned to the stage to close out with the same song they opened with, I heard God speak to me through His Spirit saying, “This is your safe place.”

We returned faithfully week after week. After our initial “visit” we were greeted every week and many of the faces became more familiar until it was just natural to see the same people every week. But we continued to “sneak” in so we really did not have any names to go with many of the faces we saw.

It wasn’t until two years later that we felt the nudging of the Holy Spirit to truly commit to this community by receiving their friendship and offering ours. What has followed as a result has been like nothing we’ve ever experienced within a community of believers.

They have not only loved us, but they have loved our children, and they have nurtured our call by speaking words of prophecy and knowledge and praying for us and giving to us constantly.

We were in Israel for three weeks, California for one week, and Dallas, TX for a few days for ministry and family time. The whole time we were away from home we were hearing about the record-breaking temperatures in and around Springfield. We were bracing ourselves to return home to an unbearable summer and I knew that this was weighing heavily on my husband.

We returned home at 8:30 on a hot Wednesday night to find a cool house and new air conditioners in three of our rooms including our two living areas and our daughters’ bedroom. These were gifts from people who chose not to divulge their names, but we know they were from our Hope family.

There are no words to express the gratitude in our hearts (although I may have already written much more than some may have the patience or time to read:). Your gifts over the past 3 years have touched us much deeper than many we have received from others in the past, because we know that they came from wells of love and altars of sacrifice. You have provided for us, and more importantly for our girls, what we could not. We do not take this lightly. We love you all deeply and will always praise God for guiding us through the silent halls of Hope on that somber Sunday morning 5 years ago. In doing so, He lead us to YOU. Our desire is to be as much of a blessing to you, or more, as you have been to us.

We are so excited because we see in the Word that love like you have given us is often times followed up with “the Lord add[ing] to their number daily those… being saved.” (Acts 2:47) And that is our ultimate desire as a community.

We love you, our treasured friends,